Two-dimensional visualizations of dark matter structures in simulations, such as the images below, suffer from the shortcoming that the density has to be projected along one dimension. In order to understand the true, three-dimensional density structure, we want to create three-dimensional surfaces and materialize them into tangible objects using 3D printers. For this experiment, we chose the two sections of a simulation shown below: the entire simulation box and a smaller region around a massive, growing halo. 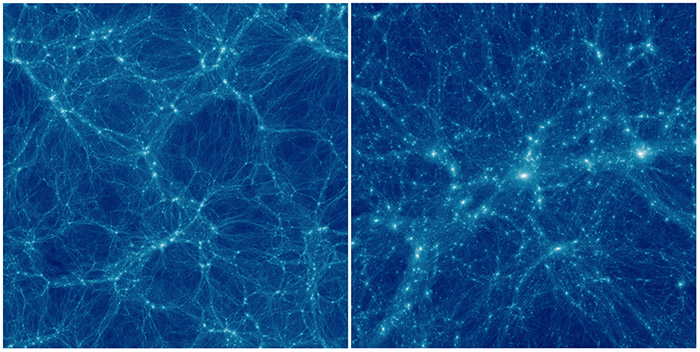 In order to print the dark matter “shape” of these volumes, we need to simplify the density field into one closed, coherent surface. This represents a huge simplification: in the images above, we use a color scale to express the range of dark matter densities, which we now have to capture in only one surface. We chose this surface to be the contour where the density reaches a particular value, slightly higher than the mean density of the universe. The images below illustrate how we further simplify this surface to make it 3D printable. 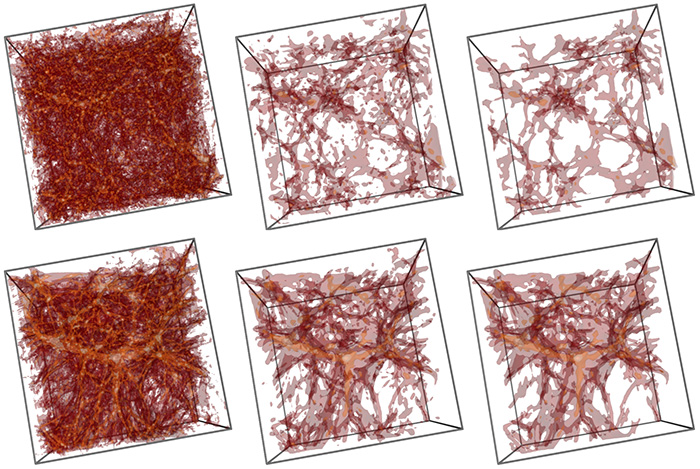 Simplification of iso-density contours for 3D printing. The top row shows the entire simulation volume, the bottom row the small region around a large halo. Left: Three iso-density contours (red, orange, yellow) at 1.26, 10, and 100 times the mean density of dark matter. The orange and yellow contours are shown to highlight the densest structures, but the red contour is the one chosen for 3D printing. The surface is way too complicated for printing at this stage though. Center: The density field has been smoothed, making the contour a lot simpler. Right: Unconnected “islands” have been removed, leaving only one coherent surface.

Finally, we convert the simplified surfaces shown in the right panels into 3D printable files using the Blender software. The process summarized here is discussed in much greater detail in our first paper.